Humidity is a problem that isn’t hard to resolve with one of the best dehumidifiers. Choosing the right dehumidifier for your home can make all the difference in breathing, controlling mold, and just generally feeling comfortable around the house. Let’s take a look at two of the top dehumidifiers from Frigidaire to see which one fits your needs. 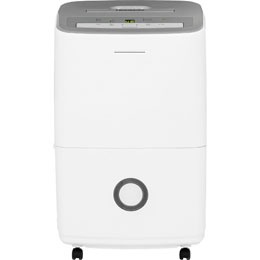 The Frigidaire FFAD7033R1 is made especially for large rooms up to 1500 square feet if the air feels damp and averages 60 to 70% humidity. Of course, this specificationcould be a little lowif you live in a very humid climate, or if multiple people spend time together in that area of your home. And if you were to place it in a very wet space with seepage, say 85 to 100% humidity, then the maximum size would be limited to 1000 square feet.

Since it can remove up to 70 pints of water per day, but has a 13.1 pint recipient, consider placing it near a drain so you won’t have to empty it yourself. For this option, all you need is a regular garden hose to connect to the dehumidifier. Otherwise, you’ll need to depend on the full water tank alert in order to empty the bucket in time before the dehumidifier ceases operation automatically.

You may love some of the other convenient features of the FFAD7033R1. For example, it has a washable filter that keeps bacteria and odors under control. It also has digital humidity control that lets you set the desired dryness of the air it expels. And should you need to place it in an unheated space, like a basement, it will operate in air as cold as 41 degrees F.

When you set up the dehumidifier to run, you can select not just the humidity, but also the fan speed. On its highest setting, the FFAD7033R1 moves up to 182 cubic feet of air per minute and only makes 51dB of noise, comparable to a portable fan. It’s slightly quieter than the FAD704DWD reviewed below.

This Frigidaire humidifier also has a timer function. You can program a delayed start or a planned stop to its operation from 30 minutes up to 24 hours ahead.

The FFAD7033R1 is UL Listed and Energy Star Certified, for safety and to keep your power bill low. It weighs only 47 pounds and has caster wheels to help you move it easily. 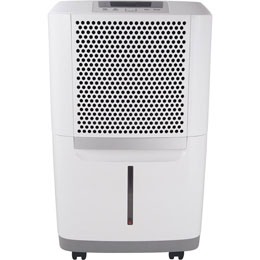 On the surface, the Frigidaire FAD704DWD and the FFAD7033R1 described above seem similar. Why would you choose one or the other if they both remove up to 70 pints of water a day?

One reason you might select the FAD704DWD is that it can process up to 194 cubic feet of air per minute. Another is that it has a larger water recipient that holds up to 16.3 pints. But it runs slightly louder at 53dB, and it only has two fan settings, not three.

Otherwise, the two dehumidifiers are pretty alike. The FAD704DWD has an automatic shutoff feature should its water tank fill up, or you can simply set it up for continuous draining with a hose.

It can also operate in temperatures as cold as 41 degrees F, letting you set the desired output humidity from 35 to 85%. Plus, a washable filter traps bacteria and odors to keep that musty smell at bay.

And one other feature you’ll appreciate is the timer function. You can set a delayed start or a planned halt to operation anywhere from 30 minutes to 24 hours ahead.

When you have a large room, a basement, or any space up to 1500 square feet in size, both of these Frigidaire dehumidifiers can reduce the moisture in the air.

If you can’t set up a continuous drain with a hose, consider getting the FAD704DWD since it has a larger water tank. Unfortunately, it also operates just a little louder and only has two fan speeds.

If you don’t mind a slightly smaller water tank, the FFAD7033R1 runs a little quieter and has three fan speeds.

Click here to Check out Frigidaire FFAD7033R1 Price on Amazon.com!