As an Amazon Associate I earn from qualifying purchases.
Home
Keypad & Remote Reviews
Liftmaster 8500 vs 3800 Review

Jackshaft openers mount beside your garage door instead of taking up space overhead. They are ideal when you have tall vehicles or a low ceiling. If you’re looking for the convenience of opening your garage without getting out of your car or straining your back, check out these two openers from LiftMaster. Let’s look at them both and see which one is the best for you. 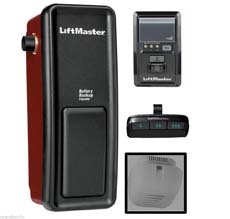 The LiftMaster 8500 is the new, upgraded version of the popular 3800 model. Its control panel now features MyQ technology. This means the opener and interior light can be controlled by a smartphone and not just the remote control. The opener can send emails or texts to alert the owner to the status of the door and light if the Internet gateway is also installed and working.

In order to use the MyQ option over the Internet, the user needs to install and set up the 888LM Internet gateway. The gateway is sold separately.

But you don’t have to set up the gateway in order to enjoy other features of the opener. The 8500 has a lot of security and safety elements. It gives an audible and visual warning when the door is about to close, and it stops if it senses something in its path. A motion detector turns on the garage light when it senses movement entering the garage. The light has an adjustable timer, and the door does too. It will close after a predetermined delay without needing another command from the remote.The Power Lock deadbolt keeps the door from being forced open. The control panel sends a new code to the remote each time the remote is used so that the door can’t be tricked or hacked open. It can also lock out the remote.

The remote clips on the sun visor of your car and has soft blue lighting to make it easy to use in the dark. The control panel has its own lighting, too, but it doesn’t tell the temperature like the 3800’s panel used to do.

The opener’s 24V motor is very quiet, and can run off battery backup if the power goes out. The soft start and soft stop means the door works quietly, too. (The battery backup is sold separately.) It handles doors that weigh up to 650 pounds.

More features of the Liftmaster 8500

The 3800 was very popular from the time of its release in 2010 until it was recently replaced by the 8500. Let’s go over what made the 3800 special so you can compare both models.

Just like the 8500 above, this opener was made to open sectional garage doors that open with a one-inch torsion bar. It could handle doors up to 14 feet in height and 18 feet in width that weighed no more than 650 pounds. It also needed a track with a 12-inch radius. The motor monitored the cable tension to keep it from getting too slack. The soft start and soft stop meant it started moving and stopped at a lower speed to avoid damaging the door itself. It also had a sensor that halted the door if something moved across its path.

Even though it had a lot of power, the motor itself was super quiet. The 3800 had helpful security features, like a 200-watt light and a power lock to make sure the door couldn’t be forced open. The remote control had a neat component: it activated a soft blue light as soon as it sensed the user’s hand coming near so it was easy to use in the dark. The rolling security code changed each time the remote was used so that it would be difficult for someone without authorization to hack the door open.

The LCD smart control panel was innovative. It had a nightlight/backlight and showed the temperature and the status of the 3800. It had two buttons for the safety features—one to lock out the remote and one to turn on the light. The remote could be programmed from the panel instead of only with the opener itself.This saved having to make a trip up a ladder.

More features of the Liftmaster 3800

The 8500 is proving to be just as popular and dependable as the 3800. The Internet connectivity and ability to communicate with a smartphone are a big bonus.