If you’re looking for a new wireless router that has Ethernet capability and can function as a print and media server, consider these two cost-effective models from TP-LINK. They use Broadcom chips for fast upload and download speeds. Plus, the C9 comes with a Powerline kit. Let’s take a look at them both to see which one will be the best for you. 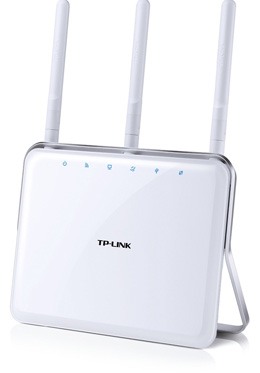 TP-LINK often waits to release a new product once the components have shown promise in other brands. This means their routers tend to be stable, solid performers sold at a reasonable price. The Archer C8 is exactly that.

The C8 is based on the Broadcom BCM4709 chip and has second-generation improved AC1750 wireless technology. While it doesn’t have a built-in VPN server, it’s capable of serving as a file server with FTP and Samba, and a media server with UPnP. The Archer C8 is fast enough to let you enjoy video streaming and gaming over your home network.

These are fun features for homes that are just now upgrading to this new technology. For example, lets say you have a lot of photos, videos, and music that you want to share with others in the same house. Plug a flash drive or external hard drive into either the USB 2.0 or the faster USB 3.0 ports on the router and anyone with authorization can download or view them.

If you have a printer that isn’t wireless, you can still print to it wirelessly by plugging it into one of the USB ports. If you have a computer that you prefer to connect by Ethernet, the C8 has four Gigabit ports for this purpose.

While this router supports 802.11ac, the newer generation of Wi-Fi, it’s backwards compatible with b/g/n so older wireless devices aren’t left without a connection. It has simultaneous dual band networks for both 2.4GHz and 5GHz. With 1.75Gbps of total bandwidth and an 800MHz dual-core processor, everyone in the house can stream video and play games without slowing down the router.

If you ask why there are three antennas instead of just one or two, it’s because they help keep the wireless signal pattern evenly distributed around your home. TP-LINK calls this “Beamforming.”

So besides all these great features, what else is there? A Guest Network and Parental Controls also come ready to use on the Archer C8. The Guest Network lets you share your wireless connection with a visitor without having to give them the password. The Parental Controls let an adult set up limited access to safe sites online.

Finally, for those who had a terrible time setting up a router in the past, things are much easier now. TP-LINK lets you set up your router from a computer, tablet, or smartphone in just a few minutes with their guided access installation. 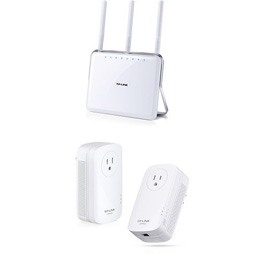 The TP-LINK Archer C9 is the update to the Archer C8 we reviewed above. Externally they look the same. Internally they differ because of the wireless chipset. The C9 is AC1900 class with a newer Broadcom chip so it’s a bit faster with a slightly larger bandwidth than the C8. Other than that difference they are virtually the same router.

So if you already have an Archer C8, there isn’t much reason to upgrade to a C9 unless you want the Ethernet over Powerline kit that comes with it. Let’s take a look at that now.

Instead of relying on a spotty Wi-Fi connection in a distant corner of the house or broadcasting your sensitive information over a wireless network, why not wire your connection? You don’t need to run Ethernet cords along the walls for this. The Powerline adapters in the TL-PA8010P Kit are the perfect solution.

All you have to do is plug the adaptors into a power outlet in the wall and then use an Ethernet cable to plug your device into the adapter. All the data you then send over your home network travels along the electrical lines of your home. There’s no need to install any software or configure anything at all. Plug and play a home computer, a game console, anything that needs a wired connection.

The advantage to using a Powerline connection for your network is that you can receive data as fast as 1200Mbps. That’s great for watching 4K video. Even at the average speed of 115Mbps that some testers experienced it’s plenty fast when you consider that Blu-Ray is only 25Mbps.

If you want to create a wired network connection without installing wires and you also want a wireless router, the TP-LINK Archer C9 AC1900 Dual Band Wireless AC Gigabit Router and TP-LINK TL-PA8010P KIT are a perfect combination for you.

If you only want a wireless router with home file server and other capabilities, consider getting the TP-LINK Archer C8.