Allergy and asthma sufferers place a lot of value on clean air. In fact, anyone can benefit from air purification. Let’s take a look at these two award-winning systems from Blueair to see which one is the best for you. 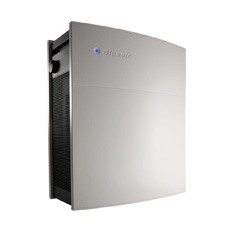 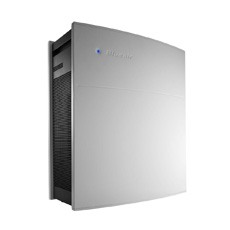 The Blueair 403 and the Blueair 450e described below are alike except for a few key differences. Both are recipients of the Excellent Swedish Design Award. Both are capable of five room air changes per hour in spaces up to 365 square feet in size (or 19 by 19 feet). Their CADR, or Clean Air Delivery Rate, is 240 cubic feet per minute. And they are both able to filter out pollutant particles as small as 0.1 micron.

The two air purification systems differ in certain convenience features. While the 403 is capable of being mounted on casters, the 450e is not. That’s a significant detail for people who may want to move their air purifier from room to room. The Blueair models aren’t lightweight. The 403 weighs 33 pounds while the 450e is heavier than that.

The 403 lacks a remote, an on/off timer, and does not have electronic sensors but the 450e does.

Now that you’ve seen what sets them apart from each other, let’s cover the details of their function. Each Blueair system has HEPASilent technology. That’s a combination of mechanical filters and electrostatic filtration, but without the side effect of creating ozone.

On their lowest setting, both purifiers operate at 32 decibels, quieter than a conversation. Their top noise level is just 52 decibels at the highest fan speed, but that’s masked by the white noise effect it creates.

Both systems feature a magnetic filter timer to alert you when you need to change the filter inside. Each filter lasts an average of 6 months and is very easy to change in seconds without tools. The 403 captures up to 99.97% of particles, making it a true HEPA system.

The Blueair 450e offers electronic sensors, a remote control, and an on/off timer—features that the 403 does not have. It also has 4 speed settings, one more than the 403 offers. At its lowest setting, it’s practically silent. At the highest speed, it runs about as loud as an electric fan would normally operate.

The “e” in the model name indicates that this air purifier is part of the E-series that can run on full automatic. The ceramic sensor and optic laser tests the air quality in your room and adjusts fan speeds by itself to keep your air in top condition.

The energy consumption is very economical, ranging from 25 to 80 watts, depending on fan speed. You can run it at the top speed setting 24 hours a day and pay less than 50 cents a day, based on the average cost per kilowatt hour in the USA.

While it weighs around 43 pounds, it comes with a carrying handle so it is possible to move it around your home or workplace. The sleek, modern design of the Blueair 450e looks good anywhere, even in an office setting.

Now that you’ve seen both air purification systems, how do you decide between them?

If you plan to move your Blueair from room to room on a regular basis, you may prefer the 403 since you can mount it on casters. It’s also a little lighter.

If you prefer to have your air purification needs taken care of automatically, consider getting the 450e. Its electronic sensors can select the appropriate fan speed so you have the cleanest air possible all day long. Plus, it comes with a remote so you can control it from a distance.