They call it an “idiot light” for a reason—it can’t tell you what’s wrong, there are too many possibilities. But Innova has a solution for you. Their scan tools can show you the systems and parts that are reporting problems and even suggest a fix. Let’s look at these two scanners and see which one will be best for your needs. 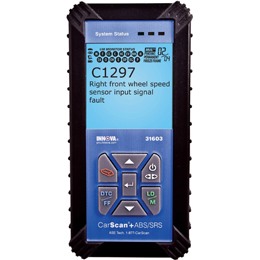 The 31603 is part of Innova’s professional tool lineup. It has a wide range of functions and comes with enticing extras to make the job a lot easier.

Not only can it read Onboard Diagnostics Information (ODB II), it also interprets Controller Area Network (CAN) codes, and more. The Anti-Lock Brake Systems (ABS) and airbag (SRS) code readers work on domestic, Toyota, and Honda vehicles. The OBD II reader works out of the box for all vehicles compliant with the standard. Upgrades are available to handle a wider range of Asian imports, OBD I codes in older cars, and European vehicles, too.

Once the 31603 reads what’s going on, it has a code lookup and definition feature so there’s no need to crack a manual or get online right away. It can freeze data, record it, graph it, play it back, and send it to a PC for reports, emailing, or printing.

Innova provides access to RepairSolutions where the user can see the most commonly reported fixes for the problems found. It also recalls and more definitions. The site even gives an estimate of labor time and cost for parts.

The backlit display on the 31603 contains twenty pieces of data about the car’s functioning. The buttons are shortcuts to most-used features so the user doesn’t have to dig through a lot of menus. The screen refreshes every 30 seconds. There are three LED lights at the top that show red, yellow, or green so the user instantly knows if the car will pass inspection or not.

Full-length user manuals in English, French, and Spanish are available at Innova’s website. There are firmware upgrades for the tool to download so the 31603 is always up-to-date. The PC Link software offered with this tool helps a technician maintain customer records and create reports. 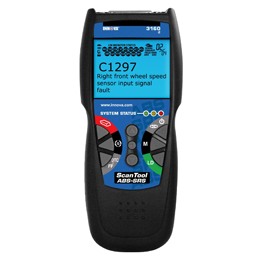 The 3160 is part of Innova’s collection of tools for do-it-yourselfers as well as professionals. It can read and clear OBD I and II, CAN, ABS, and SRS (airbag) codes on a wide range of domestic and many foreign cars, SUVs, and light trucks.No upgrade is required for this functionality, unlike the 31603. Upgrades only add codes for newer vehicles.

Like the 31603, the 3160can graph and freeze data and play it back. It has code lookup and definitions and RepairSolutions that shows the most frequent fixes for problems. The RepairSolutions database tells what parts are needed, how hard the repair is, and estimated labor time. This is a great feature to have if the user isn’t a car technician and wants to fix it themselves.

The backlit LCD screen shows lots of vehicle information at a time so there’s less need to scroll up and down. Innova also made the 3160 with “hot keys” so there’s not so many menus to navigate.

Another handy part of this tool is the red-yellow-green LEDs. The user can know instantly if the car will pass an emissions test.

If you’re working on older vehicles, the software of the 3160 can read OBD I codes right out of the box, but the 31603 has to have an upgrade first. Innova states that the 31603 is made for technicians who work on newer vehicles. Although the 3160 isn’t officially part of the pro lineup, it functions like a pro tool. (You will need to get an OBD I connector for the specific vehicle because that does not come in the box.)

If you’re working on newer cars and want something from Innova’s professional tool selection, get the 31603. It’s up-to-date and has a sleek design with a larger memory.