If your home or small office needs a new wireless router, upgrade to one of the best on the market. These two routers are competing to be the next one that streams your video and music and gives you a blazing fast connection to the Internet. Let’s look at them both to see which one will be the best for you. 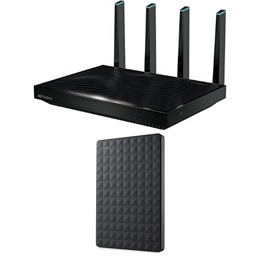 The NETGEAR Nighthawk X8 is a tri-band router based on Broadcom’s AC5300 chipset. It has one 2.4GHz and two 5GHz radios and covers b/g/n and a/n/ac for fast connections for both old and new wireless devices.

Not only can you connect wirelessly to the wide world of the Internet, you can browse files and print documents on your own home network. The Nighthawk X8 has a USB 2.0 port for sharing a printer and a USB 3.0 port for attaching the external hard drive included in the box. Store your favorite photos, books, movies, and music on the drive so each device connected to your home network can stream and download from it. You can even create a custom URL for an FTP file server.

If you’re away from home and want to retrieve a favorite photo to share, use the ReadyCLOUD software built into the router to access your USB drive at home.

If you have an UltraHD TV, Apple TV, or a Roku, wire them in with the 6 Gigabit Ethernet ports on the back of the router. You’ll have the fastest speed your Internet provider can give you. With DLNA service from the router, your TV and game console can stream movies and other files from your external hard drive.

If you prefer protection and anonymity while browsing, use the included support to set up an OpenVPN server. Plus, you can create a separate Guest Network for visitors and then you don’t need to give out your Wi-Fi password.

When the Nighthawk X8 was first released, NETGEAR did not enable MU-MIMO capability. This allows you to have several devices all streaming video or music at the same time on the same network. But since then NETGEAR released a firmware upgrade to fix that.

You may notice right off that this router looks an awful lot like a spider with its 8 antennas. This design helps it penetrate large homes with a strong Wi-Fi signal. The ASUS RT-AC5300 wireless router is a direct competitor to NETGEAR’s Nighthawk X8. Like the Nighthawk X8, it’s based on Broadcom’s AC5300 chipset and has one 2.4GHz and two 5.0GHz radios. It supports 802.11 b/g/n and a/n/ac as well as MIMO for fast streaming.

Where the ASUS router differs from the NETGEAR is in the details. While NETGEAR comes ready for OpenVPN, the ASUS RT-AC5300 supports both OpenVPN as well as PPTP and L2TP VPN servers. There’s no mention of DLNA, but this router does support UPnP for media sharing. You can also use Samba and FTP for file sharing, or the built-in media server. The built-in media server can stream several kinds of files including divx, mp4, mkv, wav, ogg, and of course, mp3.

The RT-AC5300 doesn’t come with an external hard drive like the NETGEAR kit above, but it has a USB 3.0 port to connect one, and a USB 2.0 port for a printer or second hard drive or flash drive.There is a built-in print server for Windows computers. Meanwhile, Mac computers are able to use Time Machine over the home network because the router already supports it.

If you want a fast, dependable wireless connection throughout your home as well as the options to stream media and run backups over your home network, either router will be a good choice. The details may be the best way to choose between them.

If you have a need for six Ethernet ports for your wired devices, get the NETGEAR Nighthawk X8.

If you have older mobile devices that can’t use WPA encryption, the ASUS RT-AC5300 supports this. The ASUS router also supports multiple VPN server and client setups and Time Machine backups for Mac computers.