Radar detectors have come a long way from the original Fuzzbusters. These two models from Whistler sense radar and laser guns and traps, as well as microwaves in the Ka band. But that’s not all they can do. Let’s look at them both and see which one will be best for you. 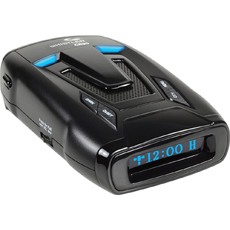 You may already know that radar and laser detectors are illegal in some places. Good thing these models from Whistler are discreet. They even have low signal emissions to avoid being detected themselves.

The CR85 finds radar, laser, and microwave detectors and gives a warning so the driver can reduce their speed before they get a ticket, or worse. Some users have reported over 5 seconds or half a mile of advance warning on highways, and a second or two in cities. The type of alert appears as text on the display and a tone sounds. The display is small but bright, and the level of brightness can be adjusted. There are different tones to choose from as well as voice alerts, or the detector can operate in silence. The auto dark feature keeps the detector from lighting up at night so it stays invisible.

The CR85 detects signals from all sides.This is handy except when speed detection is done by aircraft above the highway. Since they don’t use radar or laser, but just measured distances and vehicle speed, they can’t be detected. Whistler advises drivers to watch for white lines painted across the highway because those are the markers used.

False alarms are a problem in cities with so much interference, but there are three different selectable filter modes (city and highway, for example) to keep those from happening. The detector can also be silenced if needed.

Whistler even includes a feature called “Stay Alert” to keep drivers awake on long trips. It requires the driver to push a button to silence the alert, kind of like having an alarm for waking up.

More features of the Whistler CR85

The CR90 is a step-up from the CR85. It can do all the the CR85 does and more. It has an updateable GPS feature that keeps track of speed and red light cameras. The US database comes pre-installed. Of course, the CR90 detects radar and laser guns and traps, even the ones that use short bursts to be stealthy. Keep in mind that laser detection targets a small area, usually the license plate, so mounting the CR90 lower on the dashboard is better.

It has low emissions to avoid being detected by law enforcement and reads signals from all directions, not just in front. (Still no aircraft detection, so keep an eye out for those white lines.) The CR90 has six filter modes to greatly reduce false alarms from traffic signal flow devices and other radar detectors. It also allows bands to be turned on or off from detection. It gives a visual and verbal or tone warning when it senses a detector.

Besides the “Stay Alert” feature, the CR90 has a “Safe Driving System” that detects the safety radar used to warn of road hazards or bad weather. The detector also saves personal settings even when powered down.

More features of the Whistler CR90

Many people have bought multiples of these two Whistler detectors to place in all of their vehicles. That said, unless you want one of each, what features interest you the most?

The CR85 is a solid, no-frills, laser, radar, and Ka detector. It can be fine-tuned to a point with the filtering modes. If you have no need for the GPS database, it will serve you well.

The CR90 comes with a nation-wide GPS database of speed and camera alerts pre-installed. Since things change from time-to-time, the database can be updated through a USB connection on a Windows computer. The CR90 also has more filtering modes to further reduce false alarms. This means that the CR90 will stay relevant and useful for a while to come.