Whether you’re just getting your license or you’re a longtime ham radio operator, a portable device is handy to have. These two handheld receivers have been very popular among enthusiasts for some years now. Let’s see why and discover which one is best for you. 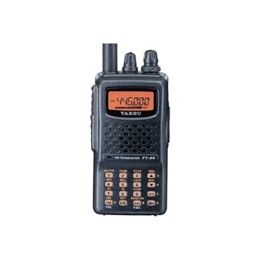 This Yaesu model has been available for ten years and it’s tried and true. It comes with a rechargeable NiMH battery time that users say lasts for a long time. It provides 5 watts of power. The FT-60R can also run off alkaline batteries with the addition of an accessory tray, but the alkaline batteries don’t last as long and don’t give the full power that the stock battery does. Unfortunately, the NiMH battery needs ten hours to charge, so having two of them is a good idea. This type of battery should not stay on its charger longer than 24 hours either.

The sound on this transceiver is nice and clear, for both transmission and reception. Since it’s a 5-watt portable model, the range is about 5 miles or less, depending on conditions. The frequencies it covers include NOAA weather broadcasts as well as the following: for reception, Air Band 108-137MHz, for transmission 144-148MHz and 430-450MHz, and also AM/FM ranges (except cell phone frequencies) at 137-520MHz and 700-999MHz. This means it covers UHF and VHF bands including aircraft transmission, as well as public safety channels. It does not cover the third band (1.25m) like the Kenwood TH-F6A does.

As for reception, users have mentioned that the stock antenna isn’t as good as some third-party ones. The antenna attaches with a SMA connector, not BNC, so finding one without using an adaptor is a little difficult.

Another great feature on the FT-60R are its ten memory banks that store over 1000 channels. Each channel can have its own alphanumeric label. All of them can be programmed in without using software, even though the task may take a while.

The Emergency Automatic ID system on the FT-60R transmits the user’s call sign and turns on the microphone in case the user is unable to use the transceiver normally. The Enhanced Paging and Code Squelch lets the user contact and receive transmissions from just one station (think walkie-talkie). There’s even a password to keep others from using the transceiver without permission.

Finally, the FT-60R is rugged. It tolerates a wide range of temperatures while operating and it is resistant to damage from drops and to water. It weighs less than a pound and fits nicely in one hand.

More features of the Yaesu FT-60R 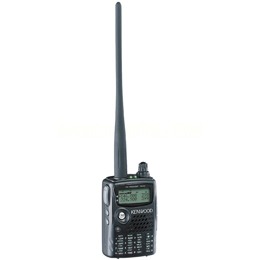 This little transceiver may be the most popular portable model ever. It’s tri-band compared to the dual-band Yaesu FT-60R. That means it covers the 144-220-440MHz frequencies, in the 2m, 1.25m, and 70cm amateur radio bands. It has 4 different transmit power levels and it can run at 5 watts on all bands. It’s powerful enough for around five miles of transmission and reception and has a nice, clear sound and powerful speaker. The TH-F6A can also access 10 weather channels and AM aircraft transmissions.

The battery in the TH-F6A is Lithium-ion so the transceiver operates longer on one charge. The body is lighter than the Yaesu FT-60R at about half a pound. It’s also a little smaller. The number of memory channels is 400, quite a bit less than on the Yaesu transceiver. One neat feature is that the mic port serves as a 9600bps data jack. It does not have an emergency feature like the Yaesu but it has VOX, so it can be voice-activated. It also has DTMF, or dual-tone multi-frequency dialing, like a touch-tone telephone, to access the local telephone network through Autopatch.

More features of the Kenwood TH-F6A

If you want tri-band function, go with the Kenwood TH-F6A. Plus, it is packet-data ready with no adapter needed and has DTMF and VOX. These are great features to round out this very capable transceiver.

If you have no need for the third band and don’t need extras, the Yaesu is a simple and powerful transceiver that has continued to be a favorite of many users over the years.