As an Amazon Associate I earn from qualifying purchases.
Home
Smoke Detector & Fire Alarm Reviews
Kidde i12040 vs I12060 Review

Kidde’s hardwired alarms are designed to keep your family safe by detecting smoke from fires. They use ionization sensing technology that can see particles sooner than traditional photoelectric detectors. But how do you know which model of smoke alarm is best for your home? Let’s review two of them to see which one is a better fit for your needs. 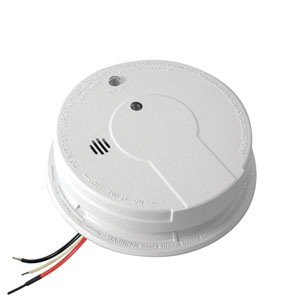 The Kidde i12040 looks like the typical smoke alarm you see mounted in ceilings anywhere. Its plain white exterior disguises the advanced sensor inside that detects invisible fire particles. And this sensor will last up to ten years before you need to replace the detector with a new one.

The i12040 has two other essential features that you’ll appreciate. One is the “hush” button that lets you silence it if there is a false alarm. Anyone who has ever burned bacon knows how important that benefit is. The hush effect lasts up to 7 minutes; then the alarm resets itself. That way you don’t need to pull out the battery.

Second, the detector is designed to be wired into your existing detection system and run off electrical power, but it also has a battery backup. That backup power source is vital for safety because fires can occur even if the electricity is off.

On another note, this mild-looking disc also has a tamper-resistant feature that keeps it from being disabled or stolen.

And of course, even though there is a small red LED light that alerts you to smoke, there is also an 85-decibel alarm horn, which is louder than a typical alarm clock.

Finally, Kidde recommends operating the smoke alarm between 40 and 100 degrees, and between 5 and 95% relative humidity.

More features of the Kidde i12040 smoke alarm: 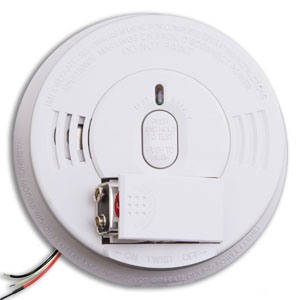 You might prefer the Kidde i12060 smoke alarm to the i12040 simply because it has a battery compartment that’s easier to access. It’s located on the front, so there’s no need to twist open the case. And that way it’s easier to make sure you have a working backup power source in case the electricity goes off. You can also see if the detector is running on electricity because the LED light will be green.

Like the other smoke detector, this one also has a hush feature. If it sounds while you’re cooking breakfast, just press the button to stop the alert. It will continue to chirp about every 30 seconds if the smoke is too dense, but it should reset within 7 minutes.

The same button that silences the alarm is also there to allow you to test it. Keep in mind that the test only confirms that the electrical parts are functioning properly. The ionization sensor, on the other hand, can only be tested with smoke or invisible particles from a fire. But since it comes with a 10-year guarantee, you shouldn’t need to replace it for at least that long.

The 85-decibel alarm sound is loud enough to wake most sleepers if the detector is in the same room. And if you’re concerned about the safety of sleeping where you have an ionization sensor, let’s address that right here.

This type of sensor is usually more sensitive for detecting particles from a fire, but it depends on a tiny amount of radioactive material to do that. That material is usually americium, and it emits alpha particles for the most part. These are not a risk to your health because they aren’t powerful enough to penetrate the plastic housing of the detector. The radiation hazard only becomes a danger if you were to dismantle the alarm and eat or breathe in the americium. So, in conclusion, when it’s time to replace your smoke alarms, just find out where to dispose of them safely.

More features of the Kidde i12060 smoke alarm:

The main difference between the two Kidde smoke alarms is the battery compartment. The i12060 is easier to access than the i12040, but the i12040 has a tamper-proof design. If you are installing alarms where they might be stolen or tampered with, get the i12040. Otherwise, the i12060 is a better choice for easy maintenance.