It’s a close race between Canon and Fujitsu. Both offer compact desktop scanners that help you organize receipts, business cards, and other documents. Let’s examine these two models to see which will be the best for your home or small office. 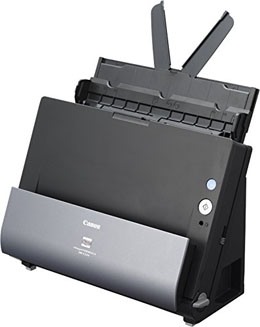 The Canon imageFormula DR-C225 is very fast at scanning—up to 25 text pages or 50 images per minute. It can scan both sides of a document, then convert it to either an image pdf or a searchable pdf file.

In its set of bundled programs, you’ll find both Nuance PaperPort and OmniPage. The first one helps you manage the documents you create from scans, and the second one provides OCR, optical character recognition. The OCR program is very accurate, even on non-traditional fonts, according to online reviewers who tested it with the DR-C225.

Although this Canon scanner doesn’t have Wi-Fi to send scans to a mobile device, it does have an option to attach them to an email. If you want Wi-Fi capability, check out the Fujitsu Scansnap described below.

Once you unpack the Canon DR0C225, you’ll see that it won’t take up much space on your desk. It measures less than a foot wide and just 6.1 inches thick. You can place it flush with a wall since it feeds from the top, and you won’t need to flip pages since it reads both sides of a paper.

If you want to launch a scan from inside an application like a word processor, the Canon scanner comes with TWAIN drivers for both Mac and Windows. This is something the Fujitsu lacks. And the included CaptureOnTouch program makes it easy to set up frequent scanning jobs that forward your scans to Dropbox, Evernote, and other cloud services.

Just imagine how easy it will be to create electronic copies of photos and forms, or import contacts from business cards. Even if you need to scan a legal-size contract, there’s no problem. The Canon DR-C225 can handle documents up to 118 inches long or pages that measure 11 by 17 inches in size. 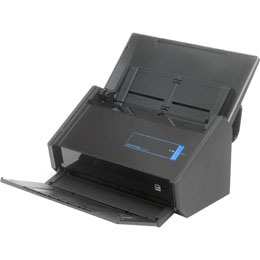 Like the Canon DR-C225, the Fujitsu ScanSnap iX500 works with both Windows and Mac computers. But it has a convenient Wi-Fi feature that lets it also send scans to iOS and Android devices like smartphones and tablets. In fact, you can use the scanner’s Wi-Fi to communicate directly with a mobile device without using a computer at all.

If you connect it to your PC by way of its included USB 3.0 cable, or over Wi-Fi, you can also send documents to Google Docs, Dropbox, Salesforce, and other online services.

Users and reviewers who tested both the Canon DR-C225 and the Fujitsu iX500 say that they are equally fast. They can both handle up to 25 pages of text or 50 images per minute. The only difference is that the Fujitsu ScanSnap can hold up to 50 pages at once, while the Canon holds only 30 at a time.

Instead of a TWAIN driver that lets you start a scan by requesting it from inside another program, like Photoshop, you’ll need to scan the document first, then send it to the program. And the included software is a little different from what comes with the Canon. For example, Fujitsu uses Abbyy FineReader for OCR. But this program also does a fine job creating searchable pdf files from non-traditional fonts.

Both of these compact desktop scanners are very fast and very good at what they do. They both get high ratings from pro reviewers and customers. It’s difficult to choose between them based on their scanning abilities.

Instead, you might find that you prefer a scanner that has built-in Wi-Fi like the Fujitsu ScanSnap iX500. It can scan directly to mobile devices without using a computer. But you won’t be able to initiate a scan from inside another program.

On the other hand, if you don’t mind needing a computer to use your scanner, the Canon imageFormula DR-C225 comes with TWAIN drivers. That means you can start a scan from inside another program, like Photoshop or Word. This option will save you time.